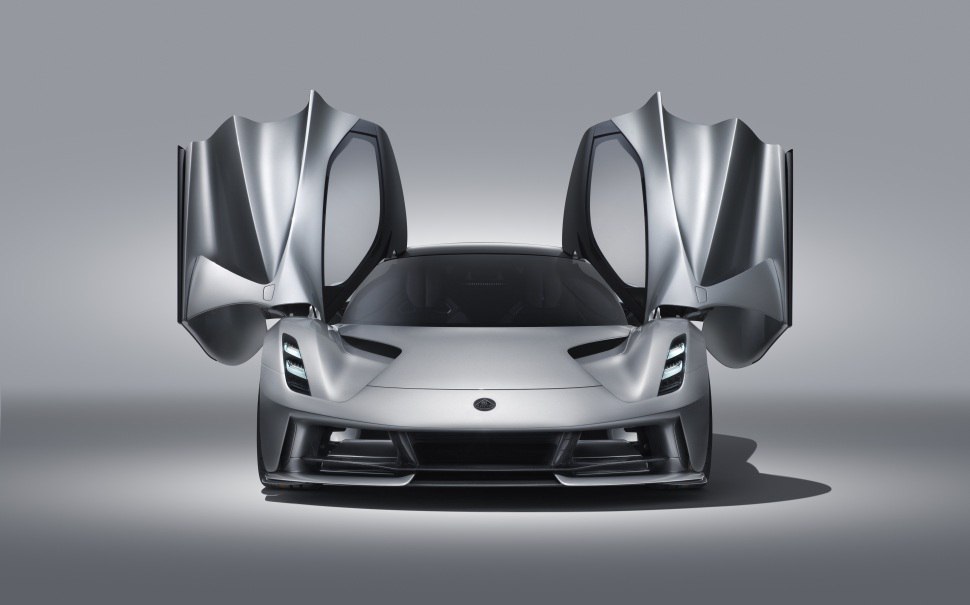 Lotus, the famous British luxury carmaker, is preparing for the grand entrance of its very first fully electric hyper car on the world car markets. The vehicle is a combination of innovative technology and one of a kind aerodynamic design. So what exactly is Evija? If we have to sum the machine up in a few words, it can be best described as a unique art masterpiece, mostly because of its body design. Some of the most loyal fans of the brand will undoubtedly find a few notable similarities between the new car and the existing production line of Lotus. However, it’s the plethora of fresh features that will set Evija apart from the rest of the Lotus' cars. Inspired by the track-oriented vehicles, Evija possesses unbeatable compactness and aerodynamic silhouette.

The uniquely sculpted front of Evija is anything but ordinary. As a centerpiece, Lotus designers have chosen to attract the viewers' focus on the slightly refreshed and enlarged brand’s logo. Made of metal and carbon fiber, the logo effortlessly integrates into the sleek front bonnet, thus exuding the sense of premium quality and craftsmanship besides the sporty vibes. A distinguishable feature of the supercar is the uniquely designed headlights. What’s special about them is the applied innovative technology, displayed via their simple and clean outlook. They incorporate delicately illuminated Lotus logo, combined with a tiny fan inside each headlight. The latter ensures not only the proper air circulation inside the lightning device but also helps expand its life expectancy. 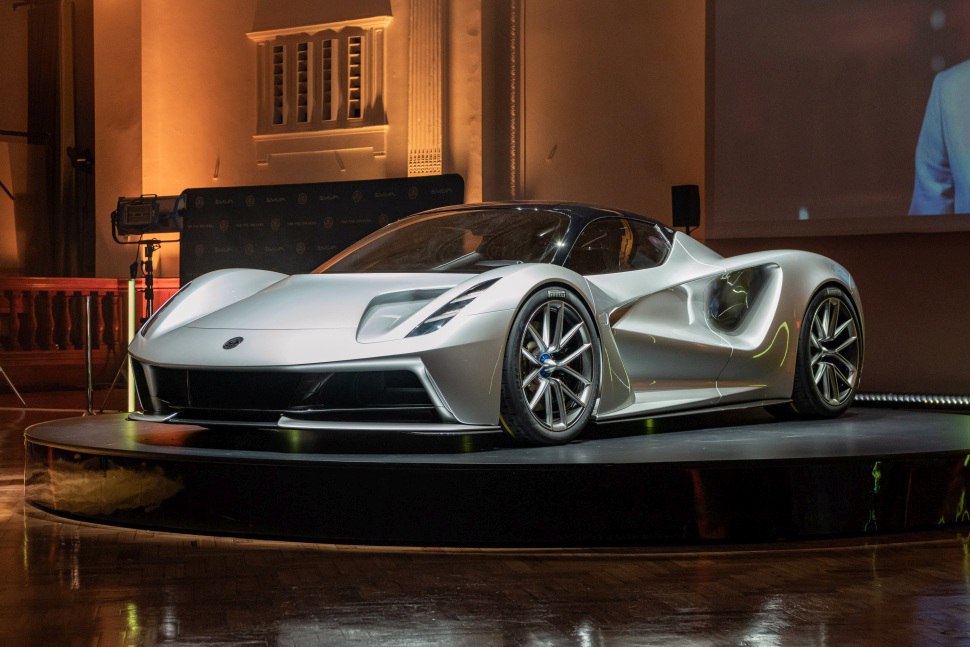 Sports cars’ fans will be interested in the slopping and rounded shape of the front bonnet. It is paired with an outstandingly shaped front spoiler and lip. The idea behind this combination is the optimization of aerodynamic efficiency and downforce. The way the upcoming airflow is being transferred from the bonnet-resting air vents to both sides of the vehicle significantly reduces the drag coefficient.

Also situated on the front bonnet are the two protruding arches. The idea behind their unusual shape is to reinforce the overall vehicle's construction along with providing better visibility to the driver. Besides, they act as active markers–helping Evija’s driver to get a better perception of the vehicle's physical dimensions. This is great in terms of creating a better spatial orientation. Those prominent wheel arches have another important role–making space for the cabin to the point Fwhere it feels and looks completely fused into the car’s metal skeleton.

Yet another intriguing feature of the Lotus Evija 2020 is the absence of the conventional front radiators. Their places are taken by meticulously shaped air tunnels, with exits right behind the front wheels, responsible for splitting the entering airflow between the two sides of the car. Apart from enhancing its aerodynamic capabilities, this creates and unbeatable sporty feeling. Being a track-oriented sports car means that Evija’s weight must be carefully overseen. In an attempt to reduce it, Lotus decided to use carbon as the main construction material. To keep it lightweight, the wheels are all made of magnesium. Unlike most of the vehicles on the market, the hyper car comes with just one bolt that connects the rim to the rest of the construction. 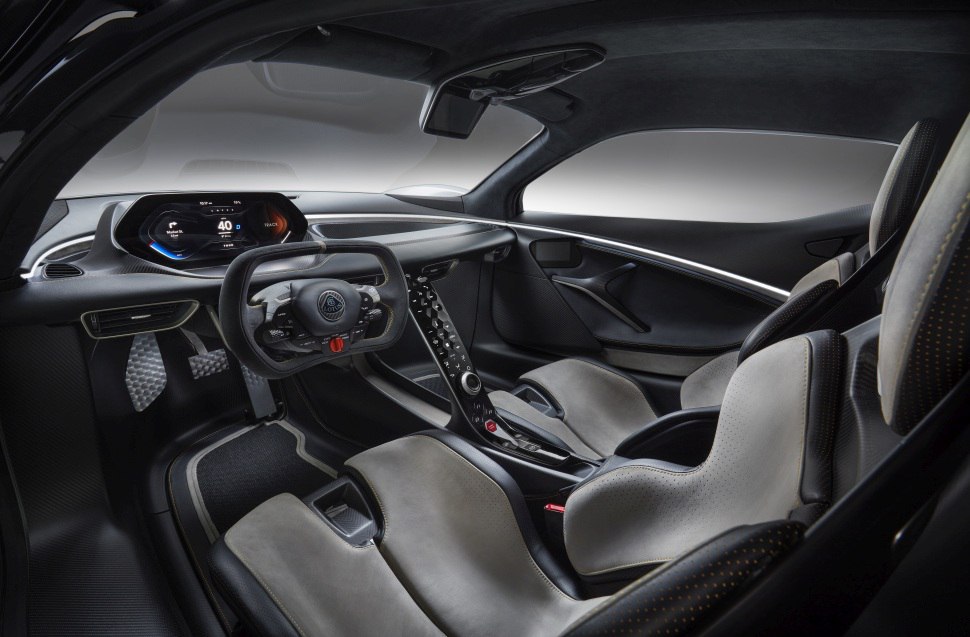 Another interesting absence from the car configuration is that of the conventional side mirrors. Instead of them, Lotus Evija comes equipped with discreetly designed high-resolution cameras.

Perhaps the most amazing part of Evija’s exterior is its rear. It features a never-before-seen design, utilizing once again the aerodynamics principles. Serving as a proof of that are the huge exit points of the side air vents, which also act as a base for the extraordinary rear lights. Also on the rear, directly behind the two seats, sits a powerful lithium-ion battery pack. Thanks to its transparent cover, anyone can take a closer look at the technology applied in detail. Huge illuminated Lotus logo, retractable rear spoiler, a specially developed DRS system, and a massive rear diffuser complete the muscular and sporty outline of the elegant hyper car.

The applied design philosophy, based on simplicity and clear lines, is continued in the vehicle’s cabin. Once again, the carbon fiber acts as a basis for the interior. It is mixed with Alcantara and leather. A few intricate metal details accentuate on the car’s masculine nature. Focused entirely on the drive and its experience behind the steering, Lotus Evija can only be proud of its cleaned of distraction innovative dashboard and steering wheel. The latter’s design is derived from F1 cars. This means that only the necessary buttons are integrated into it. Ergonomic sports seats and the five drive modes (ECO, CITY, TOUR, SPORT, TRACK) complete the sprinter’s nature. 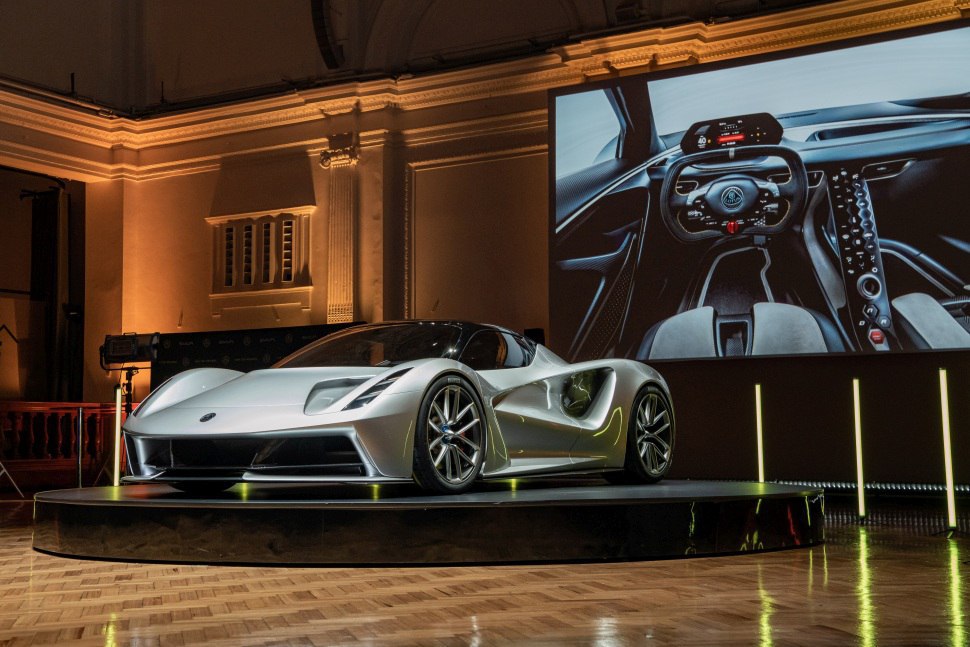 However, Evija’s most incredible characteristic is that it is fully electric, capable to reach 2000 hp (1700 Nm of torque). It takes less than 9 seconds for it to jump from 0 to 300 km/h. The maximum speed of the new Lotus is 320 km/h. As for its range, Lotus Evija can run up to 400 km (WLTP) on a single electric charge.