The automotive battery is a type of battery that supplies electricity to the automobile’s systems. The very first example of the car battery was an 1859-made lead-acid device created by the French physicist Gaston Plante. And even though the batteries implemented in modern vehicles have immensely evolved since then in terms of shape, construction, content, and characteristics, one thing has remained unchanged. And that’s the two-volt sequentially connected elements, identical to those used in Plante’s 19th-century creation. Loose, unconnected terminals of the finite elements are placed on the top of the battery’s housing as cylindrical negative and positive poles.

Based on the substances used, the car battery market offers a huge variety of choices. Lead-acid batteries are considered the most common. They are usually measured at 12,6 volts. To achieve this voltage, the battery contains a series of 6 cells, each one carrying a voltage from 2 to 2,1. To attain the nominal voltage of 6 or 24 V, there must be a connection between three or twelve of those battery cells. Each cell contains two electrodes – negative and positive. The negative is made of lead and the positive – of lead oxide. What’s specific about those electrodes is that they are shaped as parallel plates, soaked in an electrolyte liquid. They are placed facing each other and are divided by special separator plates. With over 1 billion cars on the roads worldwide, it is good to know that the lead-acid car battery can be recycled. Depending on the electrolyte's consistency, this type of car battery can be subdivided into “wet cell” and VRLA units.

VLRA batteries can come equipped with a fleece (absorptive glass mat) or with gel.

As for the wet cell battery, the electrolyte substance is a mixture of sulfuric acid (35%) and distilled water (65%). In the past, due to their construction, batteries demanded regular fill-ups with distilled water. Nowadays, thanks to modern technologies, the process of refilling the batteries with distilled water is almost always unnecessary. This powerful chemical cocktail is the reason behind the electrochemical reaction that turns the emitted chemical energy into electrical. What happens is that during the battery charging process, the materials which the electrodes are made of, react with the acid in the electrolyte liquid. The result of this chemical reaction is lead sulfate. When the battery discharges, the reverse reaction takes place – the produced lead sulfate brakes down into lead and lead-oxide elements. To enhance the elements’ mechanical stability, both lead-oxide and lead are positioned inside a metal grid.

Based on the systems they supply with electricity, car batteries can be divided into two types. The first one is a starter battery (known also as SLI). Its most prominent characteristic is that it delivers electricity to the vehicle’s starter, head and rear lights set, as well as to the ignition system. The second one is called a traction battery. This one, in particular, is commonly used in electric cars.

Starter and traction batteries have different applications in the automotive industry, based on their characteristics and capabilities. Traction batteries, are intended for continuously supplying electricity for a long period of time. That’s why they are implemented under the hood of electric-driven vehicles.

On the other hand, because of its capability to transfer a substantial amount of electricity, a starter battery is mostly used for starting the vehicle’s engine. The special thing about them is the presence of more electrodes than usual. As a chemical composition, the starter batteries consist mainly of antimony, cadmium, and calcium. Based on the type of vehicle they are integrated into (car or truck), starter batteries vary in terms of size, weight and most importantly – capacity. Naturally, truck-integrated starter batteries have a bigger capacity.

The starter battery serves as a voltage transmitter for important systems in the automobile like the injection system, controllers, heating system, the ignition coil, and the car’s starter. In case of an unexpected engine failure, it is capable of supplying the emergency light with the much-needed energy. Besides that, the starter battery smooths the alternator’s voltage and partially removes the voltage peaks, so that they don't interfere with the driving. When in standby mode, the starter battery transfers electricity to the different car systems – like controller block and radio.

Thanks to the unprecedented evolution in the automotive industry, car batteries are also often a subject of constant innovation and tests.

Although starter batteries are probably the most common type used till this very day, sometimes they cannot meet the needs of certain vehicles. This is the case with cars that have auto start-stop systems, where starter batteries find it difficult to cope with the excessive levels of electricity consumption. To handle the situation, automotive engineers opt for the so-called Enhanced Flooded Batteries (EFB). EFB’s biggest advantage is the fact that they combine a significantly larger amount of lead with revolutionary wet design and deep cylinder shape. As a result, they have a higher starting current. Other quite similar newly-developed batteries are the Absorbent Glass Mat (AGM).

The thing about EFBs is that they are intended for sole use in the start-stop system without recuperation. But it’s the AGM battery that suits cars with such systems the most. The AGM devices are about four times more powerful than any other conventional battery on the market. 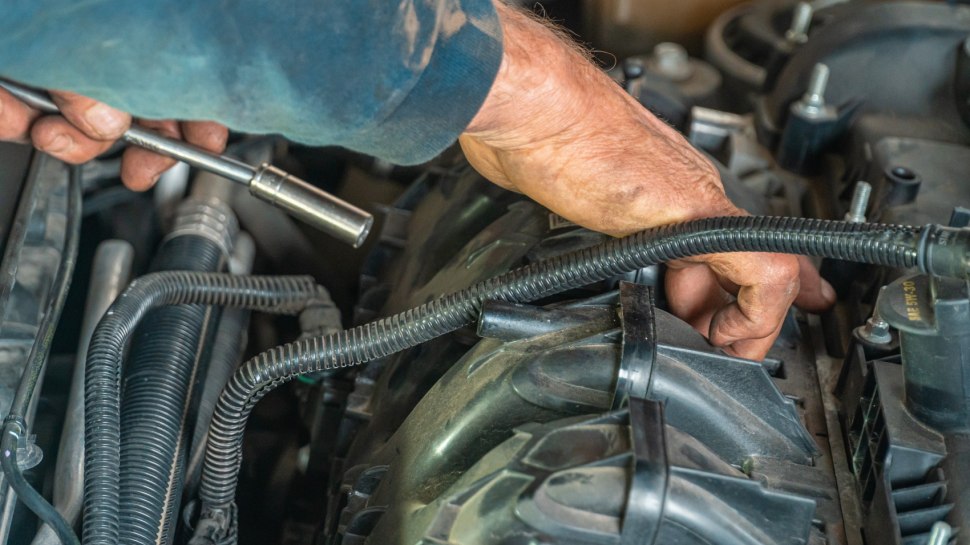 Construction of a Battery

Now that we know the most widespread battery types and their main advantages, it is time to take a closer look at the construction of the device and some of its most important elements. A key role in the proper functioning of the battery play the electrodes and the electrolytic liquid that fill the battery’s plastic casing. On the top side of this casing are mounted two poles – positive (+) and negative (-). to avoid any chance of confusion, the positive poles are distinguishably bigger. As for their location, they can be arranged in a line, parallel to either the narrower or the wider side of the battery case.

Like any other part of the vehicle, batteries need regular checkups and maintenance, as well. The connection between the vehicle's electric system and the battery is through cables placed on the positive and negative poles on the battery itself.

It’s normal for the battery to gradually deplete over time, especially if there is a constantly growing electricity consumption. Sensing the battery’s exhaustion, some owners start taking it out and charging it via portable chargers. A crucial moment is a process of taking the battery out. Probably the most important thing is to properly disconnect it from the vehicle’s system – starting from the negative terminal first. Starting from the positive terminal can cause a short circuit.

However, when putting the battery back at its place, it should be connected in a reversed order – starting from the positive terminal first. Then the nozzles of the connecting cables must be carefully placed and tightened on the negative and positive poles. Then the entire battery must be fixed again in the vehicle's body.

When the battery starts to discharge itself, these two chemicals start to fade out and are soon being replaced by small white crystal formation – sulfate. If the battery is left discharged or overcharged for a long period of time, these crystals start to merge into bigger and more solid formations and even go through the reverse process and become lead and lead-oxide again. When this happens, the battery rapidly starts to lose its capacity leading to a sudden and significant drop in the transmitted electricity through the car’s systems.

The unused battery is very prone to the above mentioned process. A sure way of avoiding this unpleasant situation is by recharging them occasionally via a battery charger. The older the battery gets, the more difficult and time consuming the process of recharge gets.