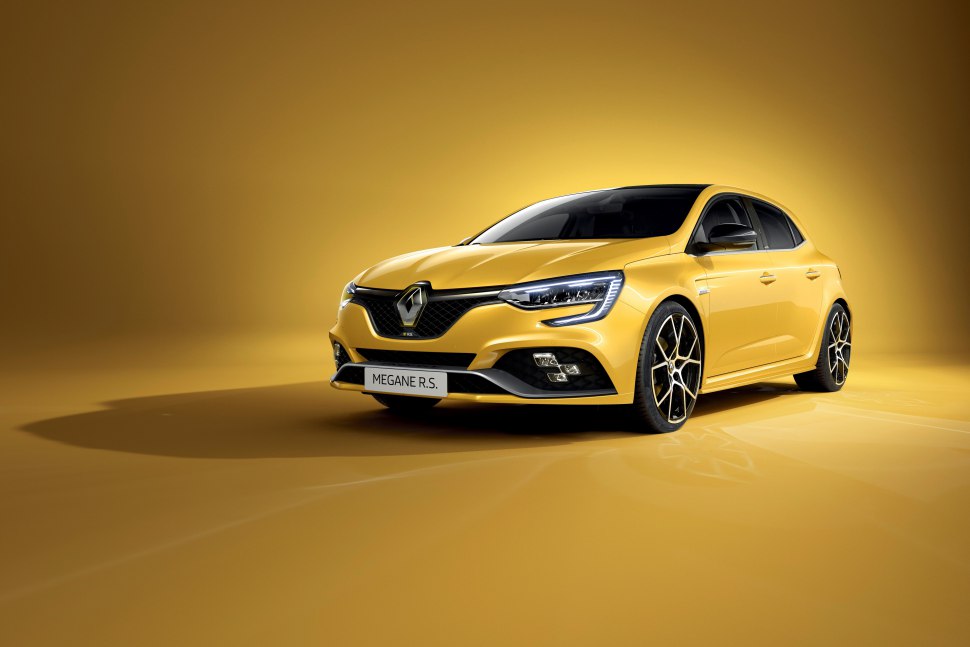 Famous French carmaker, Renault, has recently updated one of its most famous and best-selling models in Europe - Megane. The entire hatchback, estate, R.S. Line, R.S. and R.S. Trophy versions now feature the latest smart technologies, innovative E-TECH hybrid technology and some important tweaks on the interior and exterior.

The evolution of the model starts with its bold and sporty exterior outlines. In search of the perfect balance between modern technologies and authentic beauty, the French refreshed the model's silhouette. It all starts with integrating a new Pure Vision LED headlights, which significantly improve road visibility with an up to 30% during the night. Fog and rear lights are now also LED. A crucial design characteristic of the latter is their new, upper position which makes them more visible to the rest of the drivers. The rear lights' and rear panel design language also helps enhance the sporty spirit of the new Megane.

The front grille of the Megane is set lower compared to one of its predecessors, with chrome details and more intuitive curves. The aerodynamics of the car is enhanced by the additionally integrated air deflector. 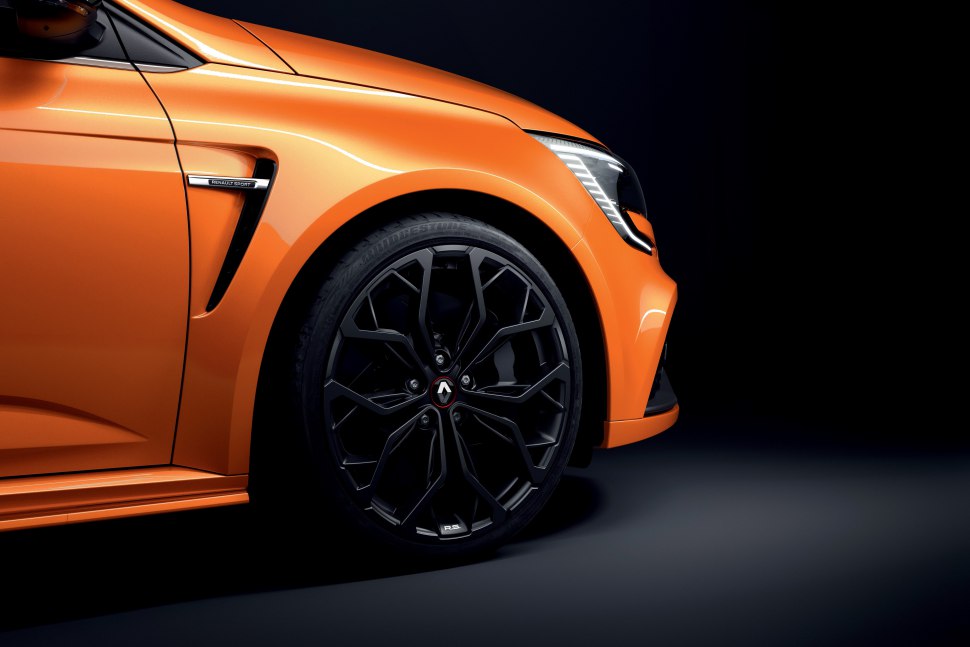 As for the cabin, the new Megane sports a revamped cockpit, that comes packed with a 9.3 vertical tablet and a 10.2-inch display (with sat-nav), part of the car's digital dashboard. The central console has undergone some notable changes, too. Perhaps, one of the most important is that Renault has dropped out of the design the usual cluster of buttons that have previously played the role of a distraction to the driver.

The fact that only the most important of them have remained untouched signifies the car maker's attempt to make the driver focus on the road. The same is applied to the steering wheel. It has removed all unnecessary controls, leaving only the most important. Via them, the driver can access Renault's in-house EASY LINK multimedia system. Inspired by modern smartphone technologies, EASY LINK is easy to navigate and operate. Comprising different useful functionalities, the system is available in three different versions (according to the chosen Megane's trim level).

An important characteristic of EASY LINK is that it is fully compatible with Android Auto and Apple CarPlay. Perhaps the most important feature of the system is the Multi-Sense technology, which includes the Renault Easy Connect application. What the latter does is to offer Megane's owner the opportunity to monitor the vehicle's location from a distance and the engine's condition, and to control the ambient light in the coupe.

Thanks to its significantly improved graphics, Multi-Sense offers its user a more simplified and intuitive interface - a prerequisite for easy orientation and usage. 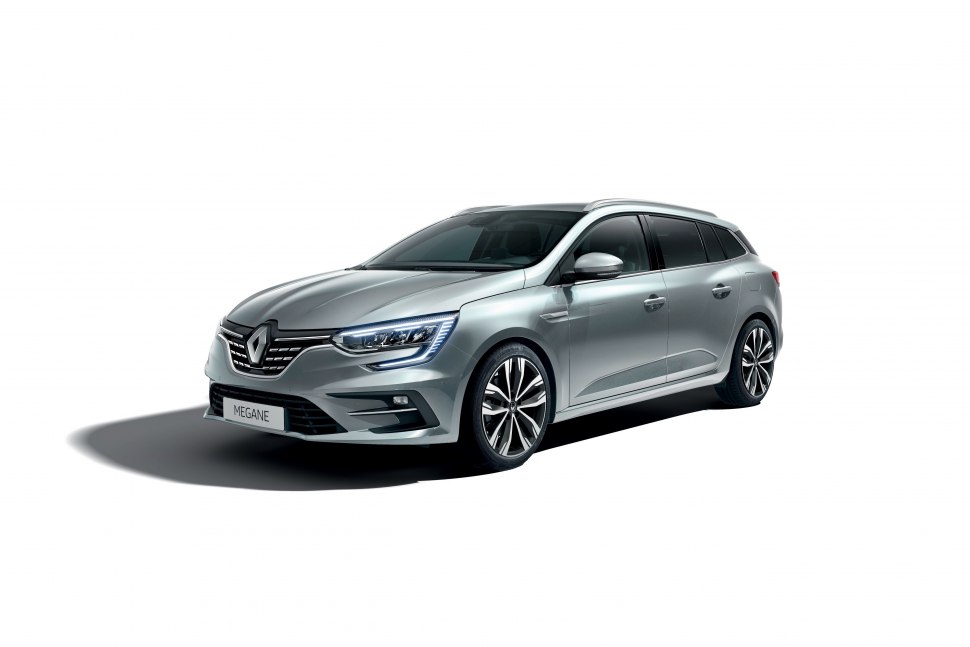 The list of assisting systems is also being updated. Highway and Traffic Jam assistants, and the Level 2 Automated driving, are probably among the most significant of them. The last-mentioned serves as proof of Renault's efforts to catch up with the competition and to show the company's policy regarding the future of the automotive industry. It aims to enhance the pleasure and comfort of driving.

Highway and Traffic jam assistance combine adaptive cruise control with a speed limiter with an automatic Stop&Go function. As a result, the car's systems are capable to regulate the vehicle's speed and distance from the rest of the machines on the road. 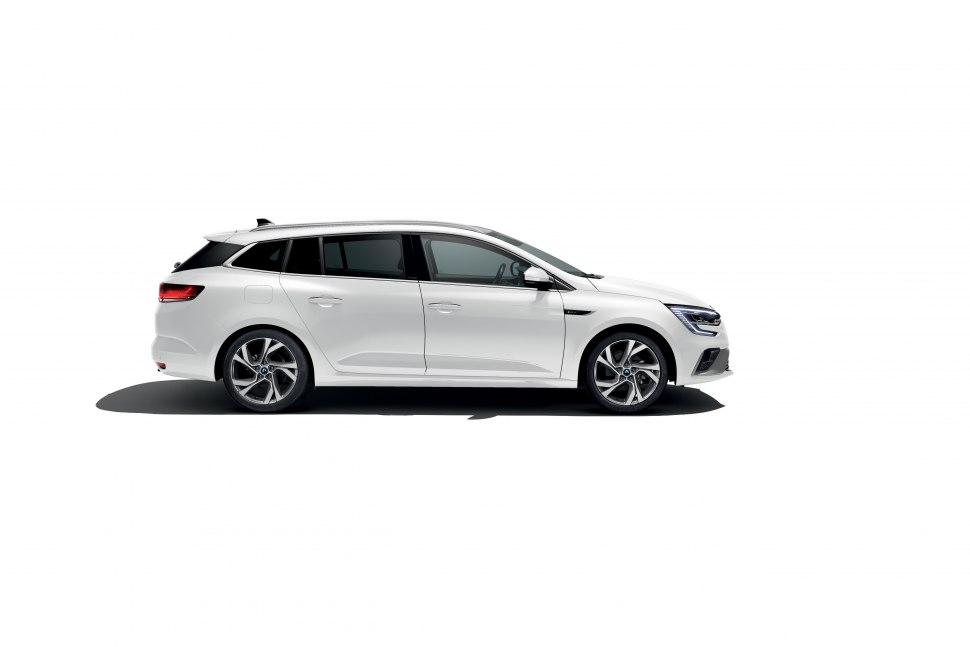 Megane's biggest surprise, however, lies not above but under the car's hood. That's the implemented E-TECH plug-in hybrid system. The same is also present in the recently updated Clio and Capture hybrid line. This F1-derived technology combines a newly developed 1.6 L 4-cylinder petrol engine with two electric motors and a sport gearbox. This clutchless gearbox is extremely effective and can shift between the gears smoothly.

Thanks to the 9.8 kWh (400V) battery capacity, the new Megane E-TECH plug-in hybrid can run on electric mode only for 50 km with a speed up to 135 km/h in a mixed cycle (WLTP) and 65 km in an urban cycle (WLTP). Another positive side of the plug-in Megane is that can be used for both long weekend journeys and everyday commute without the help of conventional fuel. Regardless of the battery's charge status, the plug-in can use take advantage of its systematic start in electric mode.

Thanks to the three special driving modes Pure, MySense and Sport, Megane E-TECH drivers can customize their experience behind the wheel by their preferences. Pure enables the vehicle to switch onto a fully electric driving mode if the battery pack has enough charge. MySense optimizes energy consumption. Sport mode uncovers Megane's true racing nature.

With introducing the new Megane R.S. Line, Renault aims to replace the GT series. Behind the R.S. nameplate stands more than a masculine silhouette but also an outstanding road performance. A distinctive design feature of the vehicle is the stretched front grille, as well as the two options for alloys - 17-inch Monthlery and 18-inch Magny-Cours.

The hatchback version of the new R.S. Line comes equipped with a top-notch exhaust system with 2 pipes, while the estate variant has just 1. 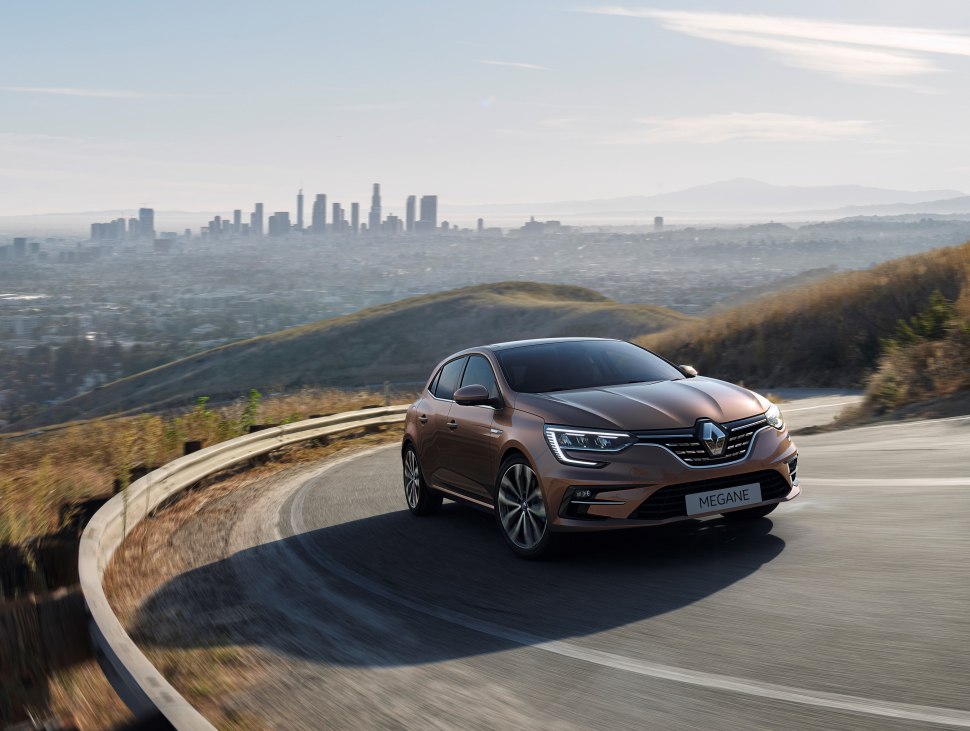 Under the bonnet of the athletic vehicle lies hidden a powerful 1.8 turbocharged engine, able to generate up to 300 hp (220 kW) and a direct injection. Combined with an EDC transmission, the car has a torque of 420 Nm. When coupled with a manual gearbox, the engine's torque slightly drops- 400 Nm.

However, no matter the chose gearbox, R.S. offers its driver and passengers a one-of-a-kind exciting road experience and better than expected acceleration numbers. Thanks to the implemented Sport 4CONTROL chassis, the Megane could only brag about its impeccable stability and agility despite the road and weather. The chassis is also responsible for the car's safety even during sharp and fast cornering.

Apart from the captivating sport outlines, Megane R.S. is packed with a variety of the latest smart technologies and assisting systems. Inside the cabin, a high-resolution 9.3-inch screen enables access to Renault's EASY LINK system. An attention grabber is the implemented 10.2-inch TFT digital speedometer. 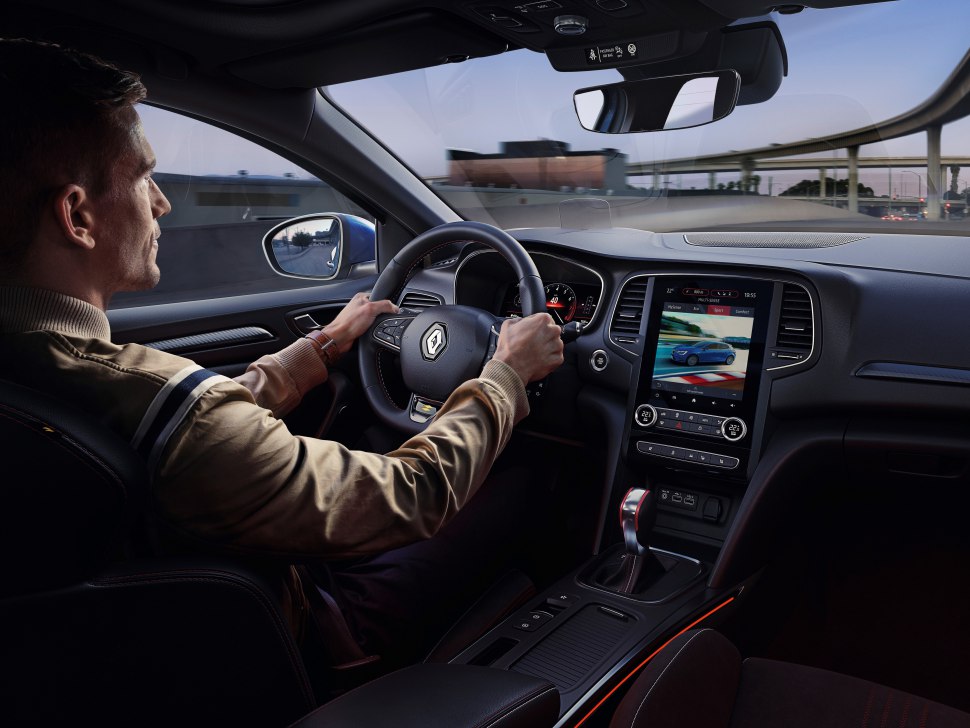 There is, however, another pivotal detail, that makes from the ordinary vehicle a sports car and that's the unbeatable roaring sound that comes out of it. Megane gets its beastly soundtrack thanks to the specially implemented mechanical valve, that perfectly fits its engine - the same power plant, used for the Alpine A110.

Last, but not the least important, is the R.S.TROPHY - the finishing touch of the Megane line. It derives strength and agility from its specially developed CUP chassis and 1.8 L turbocharged engine (300 hp). In search of the ultimate performance, Renault's engineers have combined the CUP chassis with a Torsen differential with a limited-slip with a bi-material front brake disc.

Because of their nature, the latter is lighter, more durable and disperse the friction-generated heat better than their conventional variants.

Also, the R.S. TROPHY is equipped with specially developed shock absorbers and suspension springs that can stiffen with up to 30% making the car's performance sportier.

A 1.3 Tce FAP petrol can generate from 100 to 160 hp. Top-performing engines are coupled with either a 6-speed manual or a 7-speed EDC automatic gearbox. 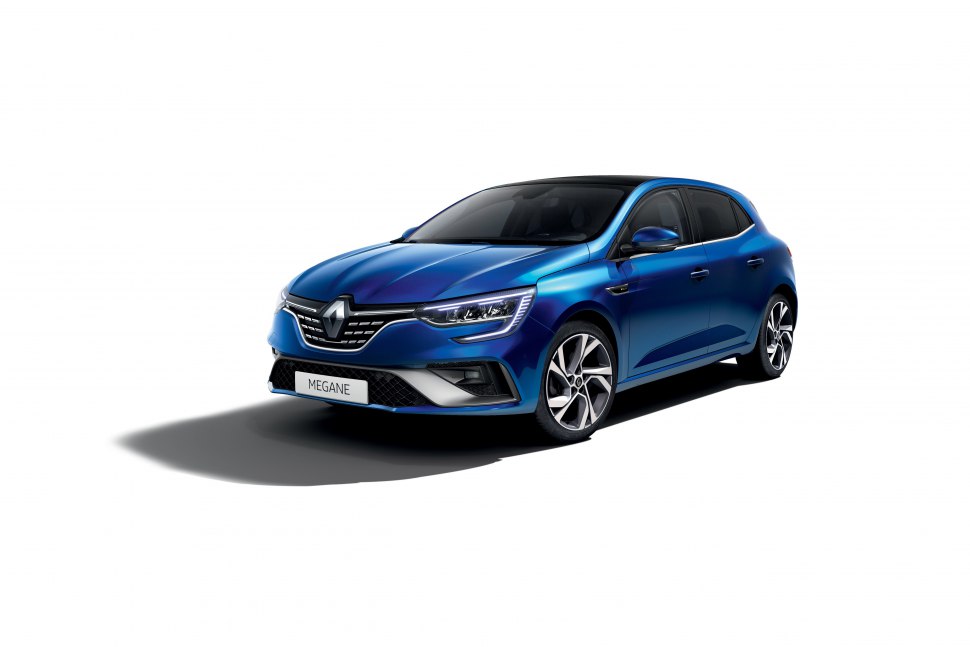 There's a diesel engine version with 1.5 Blue dCi. The generated power varies - 95 hp or 115 hp. The first version is combined with a manual transmission with 6 gears, while the 115 hp one - with a 7-speed automatic dual-clutch gearbox.